Last year before I left the UK, I bought a set of Hexon II terrain system from Kallistra.
This is an injection moulded plastic product that allows you to model a sturdy layout that can be stacked in pieces for storage.

I will admit that the storage aspect was what originally drew me to this product, as someone who is usually very pressed for space. As the underside of the tiles are hollow, it is also possible to model detail onto the tiles that will be protected while stored.
The second interesting feature is that as the layout is composed of hexes, forests or other rough terrain can be very easily delineated.

I bought the set unflocked to allow me maximum modeling potential, but to be honest it took a really long time to get these finished. If you only want grassy hexes, I would recommend the pre-flocked variety.
The tiles come with clips to keep them together, but I found that using my neoprene pin-board as a base meant I did not need them. By bizarre coincidence, it is also the exact right size to accomodate a 4x2 tile layout.

Speaking of layouts, because of their hexagonal nature, it is possible to arrange them in a hexagonal pattern instead of the usual square or rectangle. I think this has some tremendous possibilities, such as designating the six outermost hexes as deployment or reinforcement zones that can be easily randomized with a simple d6 roll!

Now that I have gone to all this trouble, I'm going to play a few games on it to see how useful they turn out to be.
I originally painted them all in a grey color with the intention of using them as a cityscape... But they just didn't look right. After adding some browns and grass they really came alive, so I think for an urban layout I will be better off making some cork tile squares with roads built in. 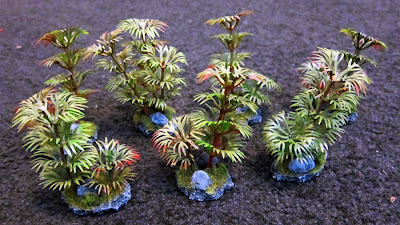 ...And you're in a world of hurt!
Here are my old trees ripped off their CD bases and glued to some new cork tile outcrops. This allows me to position them within a hex (or forest area if not using my Kallistra system) or to place as individual terrain pieces. 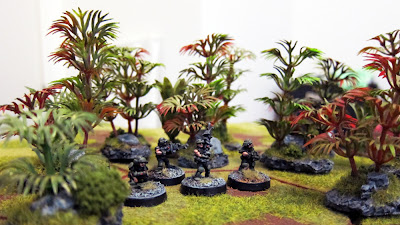 I like how they look with miniatures as seen here, and will probably make some more in future, as I have plenty of aquarium plants left and cork tile is relatively inexpensive.
I'd like to make some kind of low scrub to go with these, perhaps reindeer moss is the best way to go.

The troops pictured are my remaining Khurasan Exterminators. I now have them all painted up, which took over a year - It's nice to have them completed. 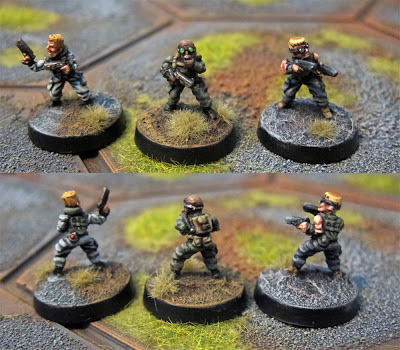 I got these from Rebel Minis recently, and while I really liked the sculpts in general (especially the dual pistols!) I wasn't so keen on them all sporting the "bald with goggles" look.
The one on the far right get of putty hairpiece, and the guy on the far left got a GZG head swap.
I painted them up as mercs or bounty hunters, so tried to make them look as different as possible without resorting to bright colors.

I'm very pleased with these figures and I think they will get a lot of use on the tabletop.