As you may have seen in the feed, I've been toiling away at my Crusty Walkers. Here is the first complete one, decked out to match my Crusty Power Armor troops.

All are from GZG, and are excellent sculpts. Some of the edges are a little soft, but for alien crustaceans, it's OK with me.

I went with an orange armor scheme, with Russian green suits underneath to tie them in with my other Crusty troops. I did all the weapons in white to show them as distinct from the dirty metal guns the rabble troops carry.

These all took quite a lot of effort due to the mechanical detail. I have actually got another 3 suits almost finished (weapons and bases to go) but they are identical poses, so I thought I'd throw out a post with these 3 done.

I'm working on my Kallistra Hexon terrain boards to have a little more space to get troops on the board. For what? For FUBAR! I played 3 games over the weekend and I think it's a great system for playing Platoon Forward (In space) as it's light and points-free.

Since my boards are quite small, I have adapted the weapon ranges and firepower values to suit. In my variant, each weapon type has varying FP depending on range. It worked out very well in my test games, as the rules are so simple to start with. With this system, a combat shotgun behaves differently to an assault rifle for example, which I like.

The (extremely flexible) Platoon Forward scenario generator includes things like squad support weapons and AT guns.. Something I lack in general. I am going to need to order some big guns (probably from GZH again) in due course, but I think I'll start the campaign without them  or see what I can convert in the meantime.

My next step will be to generate my platoon, which should be fun! I'm going to use my 5150 definition of a platoon here... 3 fireteams of 4 men each plus a "Platoon" commander. Can't wait.

Not a lot of time to paint lately, but as you might know, when I can't get a solid stretch of painting in, I make terrain! 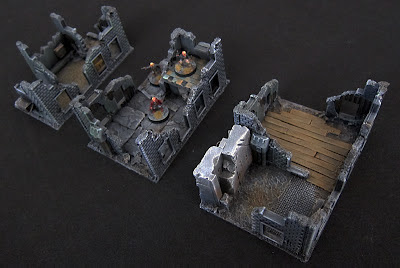 Or in this case, re-using some older terrain (Proxie models ruined walls) by making it into ruined buildings instead of free standing separate walls. They are a great product and I'm considering buying some of the corner ruins to expand my set.

A little bit of pumice gel to blend them into the bases did the trick very quickly (as they were already painted), but I wanted the interiors to look a little nicer than just throwing some dirt in there. 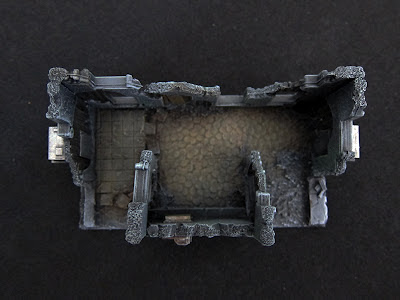 For building number one, I used a slab of Imex on the left, with a few spare tiles cut out of plastic. On the left I used some textured paper to look like cobblestones. I think this piece needs a little more work on the floor, probably checkerboard tiles. They are cheesy, but they are effective. 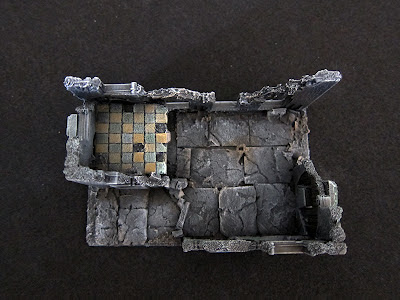 Speaking of alternating tiles, the second building featured a second level sniper perch. Both the tiles and the cracked floor were made by carving into foam core with one side of the paper peeled off. It's a great alternative to carving pink/blue foam and I find it really easy to handle. A little bit of pumice gel to add interest really set this off. 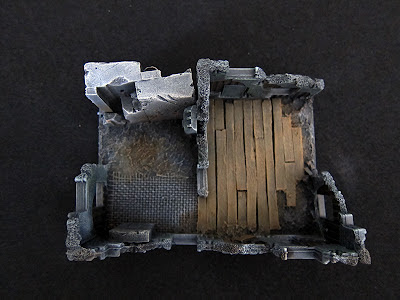 Building number three features a wooden floor made out of popsicle sticks split in half and cut up. The mesh on the left was supposed to be old carpet, which I may still do by glazing it.

On the workbench are GZG Crusties and mechs, because I want to expand them as an OpForce. This is to take a run at Platoon Forward by Toofat Lardies, using Fubar rules. These ruins will feature heavily in this project too.

I have (of course) come up with a few new projects I'm excited about that will further stress my free time, but I'll post about them when I actually do work on them. 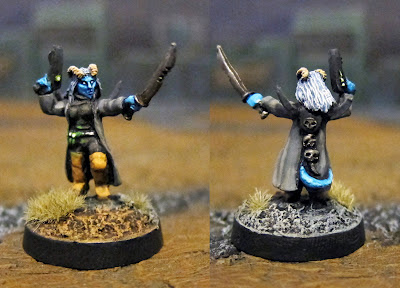 This is a Blue Moon Shivan I had half-done (see a trend here? I'm trying to get all my incomplete minis completed) a while ago and finished up recently. She is partnered with the model I painted in this post.

I went with drab colors to draw out the skin tone,  but I might try something brighter on the third member of this group.
I should mention the metallic parts of the model are very easy to do and I really like the look. Old Citadel boltgun metal painted on solid, then a wash of New Citadel Agrax earthshade. That's all.. As the new washes are quite thin, it comes out looking weathered but not quite rusty.

Here she is with her cohort, escorting a (Laserburn) nobleman/scientist/creepy robed guy: 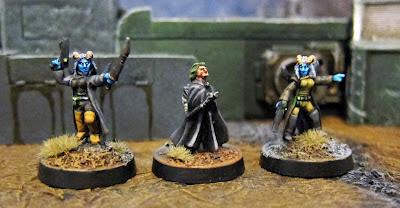 I'm feelng the need to consolidate my terrain again, which isn't very difficult. I'm going to split my collection into City Ruins and shanty town. This will help keep the basing consistant and the colors looking cohesive. I may post a little about this as I go about it, depending on my mood.

I have had this smartgunner and her tech compatriot undercoated and half-painted for months now, and in an effort to move on to the vacc suit exterminators (all from Khurasan miniatures) I've been finishing off these two and doing further highlights on the rest of the squad.

These figures have a ton of detail. They were actually quite difficult to paint if I'm honest, but they are very satisfying to get finished. There are two models missing from the set, which I used a different color scheme on and I really am not happy with. I need to get some Dettol tomorrow and strip them so I can complete the set.

The faded fatigues look makes them look very "Vietnam war" to me, and I'm glad I got away with avoiding camo, which I feel works poorly in 15mm scale.

I have some additional support figures on the way, which will be fun to round out the unit with. I think I'll pit them against my Crusties once I get hold of some dullcote and seal them all.

Thanks for looking!
30 comments:
Labels: Khurasan 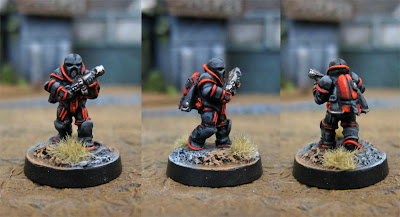 I painted this guy recently just for fun. He is a 15mm.co.uk "Disciple of the redemption" from the Laserburn range. As usual, the Laserburn sculpt reveals more goodness the more you paint it. In my games he will be a terrifying jetpack-equipped bounty hunter.

I went with a simple red and black scheme, but his armor is so interesting you could approach it a variety of ways and look good.

I have also added some grey drybrushing to my 45cm skirmish board to encourage me to play some test games of my homebrew rules. 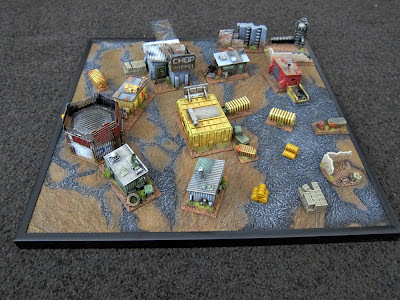 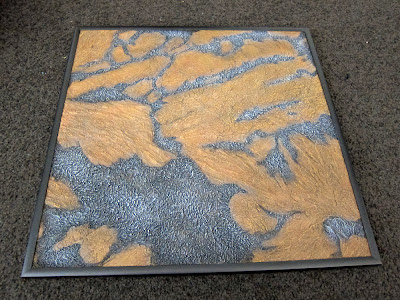 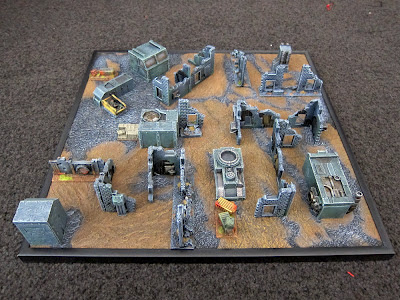