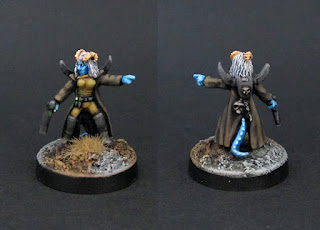 This mini is from Blue Moon Manufacturing. I've had a pack of them lying around for ages and now that I'm on a "Space Denizens" kick, I thought it was about time I painted a female alien. There are actually a few really good figures in the set for roleplay-ish use. The ammo carrier will make a terrific courier and there's a very nicely posed swords-woman as well.

The skin and hair is kind of Andorian inspired, as my girlfriend has been obsessed with Star Trek Enterprise (The Scott Bakula one) and the Andorians are pretty cool in that show.

I had more success with Charadon Granite this time, by lightening it with brown instead of white and glazing it with Gryphonne Sepia wash as a final touch. I threw in a little OSL on her belt doohickey and gun for my own amusement. It's a great way to add "tech" to a sci-fi mini as just about any old lump can be turned into a light source.

In other news I have a batch of Khurasan stuff assembled and based that I need to do before any other personal work. I'd have done it already but I'm stuck on a color scheme. To add salt to the wound I'm itching to get started on the security troops and vac suited exterminators, not to mention my Mighty Monsters stuff.. but I must be strong.
Labels: Blue Moon Manufacturing