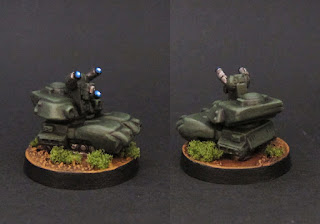 OK, this isn't 15mm scale. It's a Monpoc tank that I'll be using in my Mighty Monsters project.. Which also isn't 15mm scale. Would readers prefer I put this stuff on my 6mm blog (That I haven't updated in months) instead?

Nevertheless, a fun little model to work away on while other minis are drying. I got a few vehicles with a giant robot mini as a set on ebay.. I think in the real game they morph together or something. In the Godzilla movies there are often high-tech tanks and aircraft that try to defend the earth from monsters with varying success. These vehicles are often armed with a Maser, which is .. I dunno.. A Monster Laser?

Detail is soft and there was a thick layer of gloss paint on this guy, which means you need to highlight both aggressively and precisely.. But I think the model looks great when finished. Privateer Press really did an incredible job with this whole line. 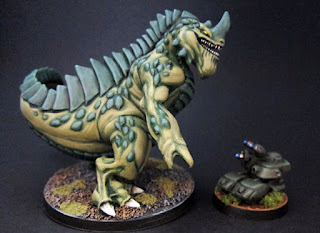 Here's the tank next to Terra Khan for scale. I was going to use 6mm scale infantry originally, as I bought 6mm scale buildings... But now I'm beginning to think 3mm stuff might look better. If there were 3mm troops and tanks in this shot the Maser tank would look huge and TK would be truly enormous!

Thanks for looking!
Labels: Monsterpocalypse, repaint