Well, the Christmas season left little time for painting unfortunately, and my Art Crime Productions troops didn't arrive until Christmas Day... But here are the first 2 fire-teams fully painted. (You can see individual paintjobs on my new Competition Page)

Doing the visors in a glowing OSL style was quite a challenge, and in retrospect I think reading some tutorials before I started may have helped (I didn't even know it was called OSL while I was doing it) ... But I did it more or less from looking at a couple of finished examples and just trying it out.

I'm happy with the results for 15mm scale figures. If you do it exactly like a 28mm fig, you lose most of the effect at table distance. As always, I've painted in a quite exaggerated style to compensate for the miniature's tiny size.

The Theme of the force was originally going to be Urban Camo with Blue lights, but the prospect of doing grey figures held me back, plus as this is a Tomorrow's War Competition, I thought it would be fitting to try to match the scheme from the front cover of Tomorrow's War.

The figures themselves are the Port Reliant Mercs pack. Joining them soon will be a grenadier figure, which I believe is so far unreleased, but will be a welcome addition to the team.


I spent this afternoon assembling and basing the Heart of the Strike Force, the Valkyries.
These models have been seen around the web a fair bit, and they do not disappoint in person. In this Strike Force, they will be operating in fire teams of 2. One tactical and one support.


I added some Stowage from Khurasan to all these guys to make them a bit more personalized.
Next up is the Close Assault team, which I believe is also unreleased as yet, but is a perfect unit for my Strike Force's backstory, that of a crack unit of Urban Combat Veterans.


Rounding out the force, a recon element of jet bikes. I was considering basing these in a very dynamic way, but I don't have the right tools at the moment and the deadline is looming, so I've just put them on 25mm bases to match the Valks. I'll probably sculpt some bricks or other junk to try to disguise the support pillar a bit better once they are painted.

An urban strike team needs one more thing: Snipers! I was going to build him an elaborate base, but I think for maximum gaming flexibility I will leave it as-is and maybe build a mini diorama base that it can slot into.

Jimbo included a good few more goodies in the package, but that will be for another post. For now, lets all just hope I can get this lot done before the deadline (15th of January) Gulp!


Quick post: Just a couple of figures I did a while ago in between other jobs, thought I'd post them before I forget. My camera setup is terrible at the moment, I need to sort out a better lamp and new box.

I'm really suffering from too many projects again, but will have to concentrate on my TW Strike force entry to make the deadline. I usually work of a few other things here and there while waiting for stuff to dry though, so hopefully a nice variety as we lead up to Christmas. I'm on holidays until 2012, so look forward to plenty of nerdy goodness in the coming weeks!
8 comments:
Labels: Copplestone Castings, Khurasan

Tough as Tungsten and loyal to the dirty end 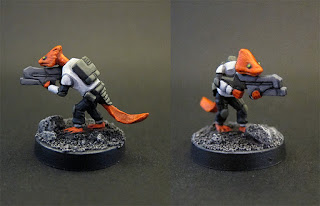 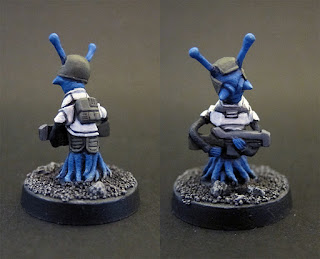 Some beautiful figures from Khurasan, not yet available but hopefully soon. They have been previewed on TMP as the Jasmine Throne Foreign Battalion, but I chose a more classic paint scheme for mine...

They paint up very nicely, and would have been a lot easier if I hadn't decided on a monochrome uniform scheme. But I HAD to!

Jon sent me these as a very kind gift and I'm looking forward to completing them over the holidays. I'm finishing work for the year this week, which should leave ample time to do my Strike Force entry (Still waiting for minis in the post) these fellas, and get started on my Mighty Monsters project. Hooray for holidays!
18 comments:
Labels: Jasmine Throne Foreign Battalion, Khurasan

A while ago, Steve from Mad Robot Miniatures contacted me about painting the Harook which were being sculpted at the time by the awesome Pedro Navarro AKA Mr. Bug man.

Steve was shooting for a Dec 1 release, but with postage from Chicago,  I only got them in hand with a couple of days to spare. I did them as fast as I could, which wasn't too hard because these are great minis to paint. They pack in a ton of detail but are sculpted with those details fairly easy to to hit with a brush, and the models themselves are quite large, most of them around 20mm tall. Each model in the set of 10 is a unique sculpt, which helps keep it interesting. They have a really nice set of combat poses too.

Dropship Horizon has already scooped me on this post, but here are the full front and back photos of my paint jobs: 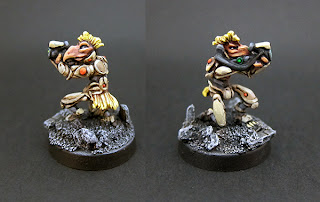 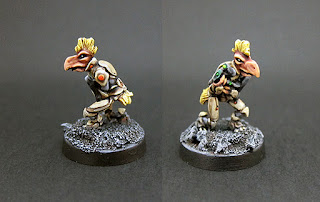 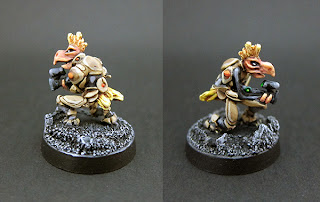 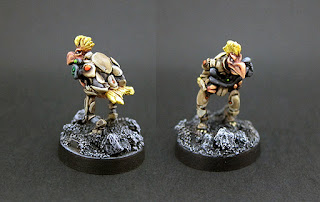 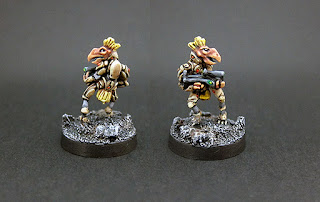 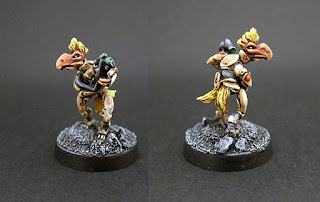 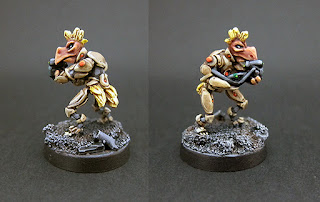 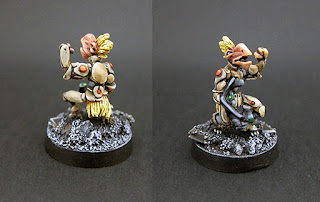 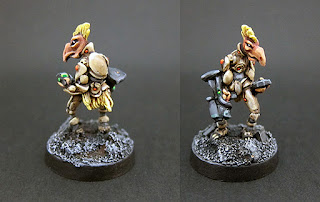 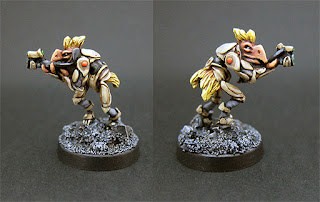 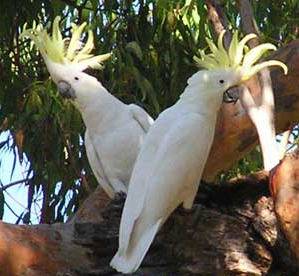 (a particularly smart, rowdy and destructive Australian native bird) but was worried that the beak would get lost in the gun. I did the flesh tone instead to make the alien features more visible and to help the body parts stand out from the weapon and suit.

Long time readers of the blog will also notice I have gone for a grey base texture, instead of my usual Calthan brown and static grass! This was firstly to make sure the suit did not get lost in the base color, and secondly because I want to start playing a lot more interior/starship corridor games, and while not strictly correct for this, it blends in better than brown dirt and clumps of grass. I may add some further details to the bitz modeled into the bases like rust etc.. But I think they look pretty good for now.