A micro-post to say I haven't just been messing about with 6mm minis , I have painted a bunch of stuff for Khurasan, but can't say anything until Jon has released them into the news. I haven't quit on 15mm yet!
3 comments:
Labels: Khurasan

Despite organizing my 15mm projects and STILL being behind my paint schedule... The planets aligned and I found an old box of my dear old Epic Orks. It dredged up dormant lust for 6mm minis. I took some photos. This happened. 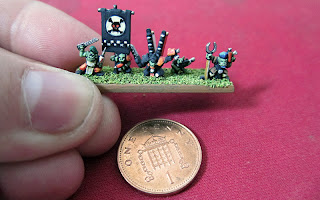 This is a side project, so don't worry, 15mm is still my main focus. Which reminds me, I must start those Copplestone barbarians. Maybe watching the new Conan movie will inspire me.
9 comments:

I have shamelessly stolen this post idea from Mik at Mik's Minis. He describes his upcoming projects as what's on his "H.U.D" (Heads up display) and I felt it was time to re-organise my ever changing project lineup as I'm having a "not much hobby time"stretch again.

1. Eldritch Horror in 15mm
To Paint:
Final 7 Khurasan zombies. 15mm.co.uk Daemon.
To build:
Some terrain (indoor floorboard style modules? Bayou terrain on CD's?) convert some Agents from The Scene into 1930's types.
2. Sci Fi narrative skirmish
To Paint:
RAFM Traveller figures, Blue moon Aquans, Shivans, GZG Ravagers, 15mm.co.uk Octopods, Micropanzer troopers, GZG Alien mercs.
To Build:
Shanty town tech terrain, Convert some Rebel minis Titan Marines, Investigate 3d printing some "Star-ingrad" ruins modules.
3. Solo Rules
Finish 1/2 done Eldritch Horror supplement for ItEN. Finish up and format "Throwdown" a new set of ultra ultra fast gunfight rules I've cooked up. (I know I never really totally finished Gut Check.. I'm sorry... I get distracted really easily)
4. Decide
...On what the heck type of terrain to concentrate on, as I've built:
Regular- For use with a Zuzzy mat. Most of this has been gradually cannibalized into Hex based stuff or sold off to Robin from Gruntz. I have almost nothing left.
Modular Squares- For grid based rules I keep neglecting to use (Forlorn Hope) and ItEN.. I suppose. I put an awful lot of work into these but haven't played a single game with them. Worth selling?
Heroscape Hexes- I thought they looked nice and would save me measuring. I think I'll keep them for playing RSBS or Quik or something like that. Maybe I can use them intelligently for Throwdown somehow. They aren't great for doing urban terrain and I'm starting to think they look less nice than traditional terrain, say on CD's.
CD Bases- OK, I haven't built any but my latest hot idea is about using them to make terrain that would be very easy to source, easy to place on the table (everything fixed to CD's, no loose bits) and completely uniform/interchangable. Plus I thought of a cool way to use them that means you don't need rulers. The downside is it would be the 4th different type of terrain I have, Although it would be compatible "regular" terrain I suppose, so maybe not that bad.
I have a really bad habit of sourcing, buying and painting a bunch of terrain I don't end up actually using for any games. Worse, I think I've spent more time painting terrain than minis in the last year, which is ass-backwards. This is getting silly (and hard to store..) So I need to be brutal and narrow it down! How brutal? I'm giving away a big box of lego* to charity today.. That's how brutal.
So yeah.. Pretty messy H.U.D, but there you go. Now figuring out how to add it to my page.
*Don't worry Mik, I saved all the minifigs.
3 comments: 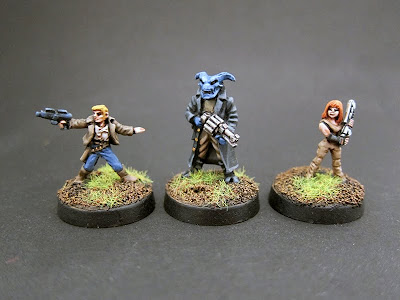 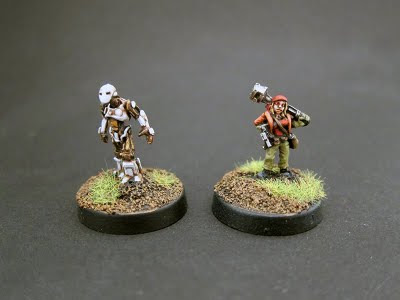 I painted these a while ago and had been putting off photographing them because of the eyes. Painting eyes on a 15mm figure is a tricky business... Many sculpts don't really have eyes, more just hollows. I think this actually looks better a lot of the time and is easy to paint. These models are amazingly detailed, but the eyes are so deep-set I'm not sure I can get a brush tip in without hitting the edges of the face. I think eyeballs look best on creatures where they can be a bit cartoony. Anyway, I kind of gave up for the moment and declared them done.

Apart from the big Alien guy, these figures are a bit on the small side. Compared to the newer 18mm-ish UNSC models, these look like teenagers. Maybe not a bad thing. They scale a lot better with old true 15mm models than newer sculpts that tend toward 18mm. Compared to the Khurasan post-apoc line or the GZG UNSC, these guys look noticeably smaller.

Great models, they have inspired me to dig out all the traveller minis I went to great trouble buying then never painted.

Oops!
I moved this blog to a dedicated account, and in doing so have ended up "not following" any blogs. I will redress this gradually, as Blogger has no way to export or move a following list. In fact you can't even do a mass delete.. You have to do it one at a time. Depressing.
Just letting you guys know I will be following your blogs again soon, I just have a lot of clicking to do.
Spacejacker
5 comments:
Newer Posts Older Posts Home
Subscribe to: Posts (Atom)