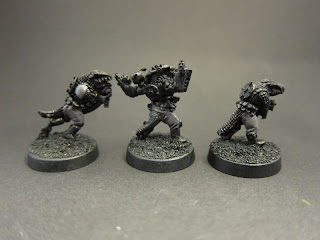 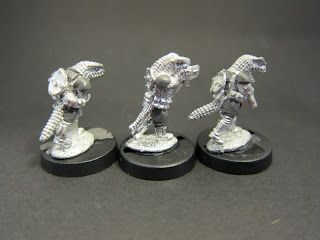 While getting a little bit of hobby time (about 2 hours) on the weekend, I ran across my unpainted Garn, and was reminded of how badly I wanted the Hegemon and Flesheater models, but then didn't paint them once in my grubby paws. So I set about doing the second Flesheater and prepping the rest.

I had the idea of making a mixed skin tone unit, with more of a uniformed and less of a "naked dinosaurs in boots" look. Don't get me wrong, I think the Lhurrg are awesome models, wang out and all.. But the bare legs with human boots has always bothered me a bit with the Garn. (I think if they had open toe boots with claws poking out the front I would be happier).

So I set about the small group with some ProCreate putty, which really is easier to use than greenstuff as people say. These are fairly modest conversions, but the idea is that these Garn will only have exposed heads, arms and tails. The rest of them will be painted as fatigues and armor plates. I am going to do kneepads on them all the match the Hegemon, but am wisely waiting until the trousers cure so I don't mess them up.

My next painting session is set aside for secret unrelased models, so the poor old Garn will have to wait a while longer, but my enthusiasm for painting them is high.
Labels: Garn, Khurasan