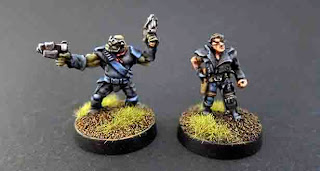 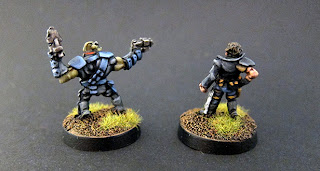 Here are a couple of figures I painted  on Friday evening. A Khurasan "Highway soldier" and his sidekick, a GZG Alien Merc mini.

Both amazing sculpts oozing character. The highway soldier is scaled very large, at about 19mm to the top of the head, which makes his ordinarily huge Alien buddy look a little less impressive than he does next to other GZG minis. However, once separated by a couple of inches on the table, these like  most "15mm" figures, scale together perfectly well.

I'm putting together a little team of 5 vault-delvers to fight mutants and the like on my vault board. I spent quite a bit of time on these guys and they are finished to a higher level of detail than I would put into units of troops. This extra detail is more for my own satisfaction than anything, as most of it is lost at table distance. I was shocked to discover the little radio mic on the Alien merc's jaw.. it gives a very nice sci-fi flavour to the model and paints up well. I'm pleased with how both these guys turned out.

It's fun over-doing a 15mm mini though, which is part of the masochistic thrill of smaller scale figures. I'm more likely to branch into 6mm skirmish than 28mm for this reason.

I see now that (as is becoming a trend with my posts of late) I have forgotten to paint the canteen on the Highway soldier's back. Oops.
Labels: GZG, Khurasan