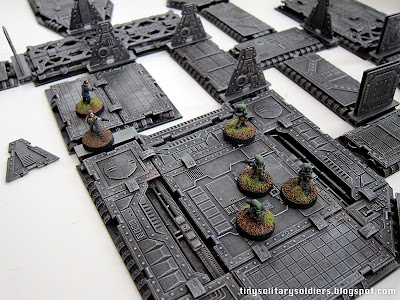 I've been quiet lately, and also had my DSL go out for a few days so have fallen behind a little on the blog.

In line with my recent obsession with Eldritch Horror, I started looking at building a modular indoor board like the ones people make for Incursion. Many distractions later, I changed my mind and started trying to figure out a simple way to do space corridors in 3d, as I'm currently working on some 15mm sci-fi furniture minis.

After several internet quests, the options seemed either expensive or extremely labor intensive. I decided to try the frugal route and build with what I already had lying around. It turned out that I had a lot of Platformer and Hexagon Metropolis/Imex sprues left over from my early terrain builds.

Ignoring walls was my first decision. They look cool, but get in the way for handling figures and vastly increase the scope of the project. Here are some step by step pics of what I did.


First of all I clipped pieces together to make rooms and corridors. The Platformer and Hexagon pieces are slightly different sizes, but I used pipe halves as borders. This gave the floors some uniform elevation so they all sat at the same height, while also hiding the size differences.


I chopped the tops off some of the triangular pieces to make doors. When I ran out I made some single square pieces to represent heavy locked bulkheads. I glued magnets into the door bases so I could remove the door when it was opened. Because the magnets in the doors themselves are not very big, the hold is not much, but enough to keep them upright during play. I'm quite pleased with them.


All in all, very easy. The only real work was cutting up the plastic bases out of my leftover perspex sheet. Next, I sprayed them all with army painter black then drybrushed them gunmetal, slapped on some devlan mud and ogryn flesh for grime, and drybrushed silver. Very very easy. I may go back and add some detail, but for now they look good enough for me. 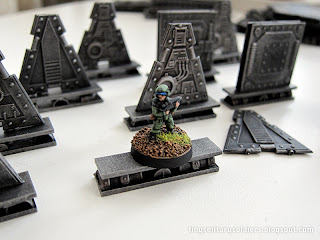 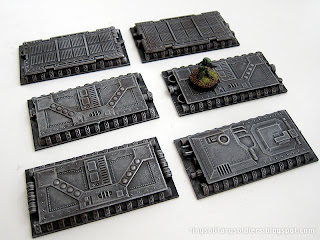 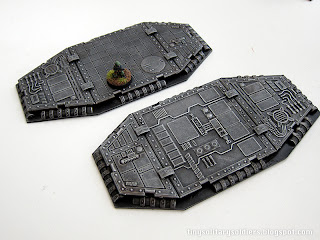 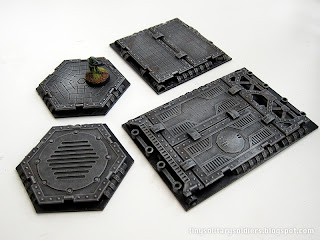 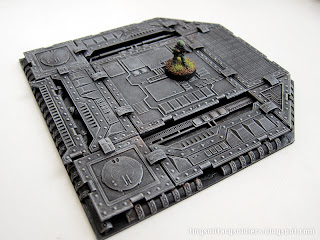 I have now run out of bits to make any more, and it seems the sets I used are now out of print, but I'll see how I get on with this set before I go spending any money.

My intention was to use Ganesha Games: Flying Lead combined with the dungeon rules from Song of Gold and Darkness. I think this would work well for an entertaining game.