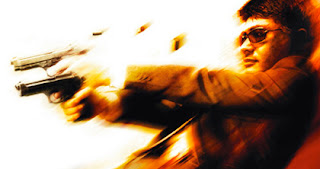 Most gamers have varying degrees of what they consider "cinematic" rules vs realistic. For me, it's pretty simple.. I am not interested in realism. In real battles people get hurt and the whole thing is pretty horrible. Also, it's often not very exciting to watch.

My favorite type of action movie is Hong Kong action, but there aren't any miniatures specific rules written for this. Understandable given how at odds with reality they are, and how the majority of wargaming grognards seem to enjoy protracted debate over such things.

In my eternal search for innovative rules I eventually happened across Crossfire, which seemed revolutionary to me as it eliminated many of the rules that caused arguments in my GW era days. Chief amongst these was measuring. Crossfire did away with measuring entirely. The only other game I discovered that didn't use measuring was a free set for swashbuckling from Eureka called "And One For All". 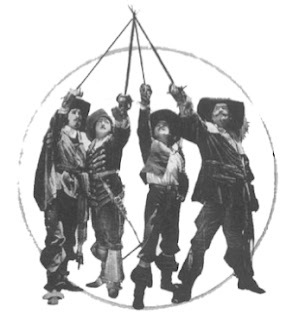 These rules were designed to go with Eureka's range of 40mm Three Musketeers figures and is without a doubt the most interesting and completely cinematic set of rules I have ever read.

But don't take my word for it, download them for free Here

They are only a few pages long and written in a very easy to understand flowchart style.

Aside from the usual niggling problem of how to decide what the enemy troops do, the rules work very well for solo gaming for one important reason: You don't have to keep track of which models have acted.
As long as you hold the initiative, you may activate any of your models you wish INCLUDING ones you have already activated (although they will lose all their swashbuckling dice). In practice this means you only have to worry about resolving the actions of one model at a time, which is a real load off the brain for the solo gamer.

I have been thinking about ways to convert these swashbuckling fencing rules into bullet-time John Woo insane gun battle rules. Here's what I have so far:

Dueling now refers to an exchange of gunfire and is called a Gun Duel. In this game, guns are only fired in Duels and kung fu or other hand to hand combat constitutes a Stunt.

If a model does not have a gun and is attacked in a duel, then it still takes part in the duel but may not harm the other model.


Terrain should be plentiful and littered with loose objects. A fight inside a Hotel kitchen, a busy tea-room etc will be much better suited than in an open field. These battles are epic Hollywood/HK Cinema set-pieces, not an ignominious military encounter. The fancier the setup the better.

*Dive for cover is a compulsory move into the nearest place that that breaks LOS to the attacker. This is like a duckback move in THW games. Imagine your figure dodging and sprinting to this point while bullets tear up everything around him.

A model may absorb as many wounds as it's Rating before dying.

Guns do not have individual characteristics as such. The stunts and awesomeness of the gun's wielder is far more important, as in action movies. (eg: Han Solo is far more deadly armed with only a pistol than a stormtrooper with a tripod mounted laser cannon. Arnie is more deadly with garden tools and improvised weapons than whole squads of henchmen with assault rifles.)

Double shot- If a 1 is not rolled, may duel any 2 visible targets simultaneously.  (must be carrying 2 guns)
Blaze away- May add an extra dice in a Gun Duel, but gun will be empty afterwards and require a reload stunt before firing again.
Bullet Dive- May attack or Gun Duel DURING next move.
Reload- Reloads any empty weapons
Gun Spin- Looks cool. Intimidating.
Take aim- Sweating and squinting optional
Shoot it up- demolish a piece of scenery. roll an opposed attack vs the scenery's size in dice. If you win, it explodes into bits. Any models nearby (radius equal to size unless otherwise specified) are attacked by the item's dice in size.
Kick over- turn an open piece of scenery into cover. (eg: table)
Take Cover- reposition yourself touching the piece of scenery. You are now "In cover" from models on the other side of the scenery, but can make no more moves this turn.

Armor saves and various special rules to cover aliens and sci-fi goodies.. But in some ways that is againsy the spirit of the game. I think writing customized exclusive stunt lists for different archetypes may be all that is needed to add some differences between models without slowing the game down.

For solo games, perhaps choosing a number of unique stunts equal to your model's rating would do the trick.


For enemy actions I have just been playing both sides using logic. However making some automated enemy system might be preferable. Having the mooks be "Predictable but plentiful" fits the genre quite well anyway.


When it is the enemy's turn, start with the model nearest to the player's forces.
Roll a D6. This is how many stunts the model will attempt before initiating a gun duel.
Labels: Solo Gaming