P.E.F Deck at the ready, I took my Mercenary Squad into some ruins on patrol with Zeig Forces reported in the area.

The P.E.F markers (White dice in some of the photos) immediately clustered toward the rear of the board.. All except one.
Capt. Duke (REP5, AR) and Slick  (REP4, AR) moved up the right flank while trooper Miller (REP4, AR) Moved up and peeked around the corner while Horowitz (REP4, SAW) and Jones (REP4,AR) Took up position behind some crates.

Miller gulped. The P.E.F was an equal number of Heavy Warbots.  "It's never a bloody false alarm is it." He muttered. A roll on my homebrew enemy disposition chart showed that the Heavy Warbots were unaware in a line facing away. 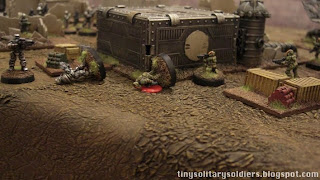 Forgetting that Warbots (using the scourge rules) don't in fact take "Man Down" tests, Miller figured he wasn't going to get another shot in the back in the open again, so let rip with all 3 dice into the nearest Warbot. Rather unexpectedly, he nailed it right in the cortex and it dropped like a rock.

Ignoring their comrade, the remaining 2 Warbots passed their received fire test, spun around emptied 8 dice of LMG fire into him. Shielded somewhat by the corner of the building, Miller went down in a shower of blood.. Still alive, but out of the fight. Another marched relentlessly around the corner, right into a withering hail of fire from Horowitz's SAW. Sparks showered, but it was only knocked down.

While Horowitz covered the corner from behind the crates, Jones ran out and dragged Miller out of the line of fire. 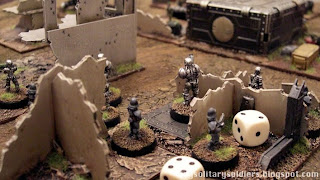 Meanwhile on the other flank, Slick crept up and got a bead on the only enemy P.E.F not clustered in a ruin.. Main Force! 3x as many in 3 groups.
Bugger.

The activation dice left both sides rooted to the spot for a few turns but eventually the Warbots marched toward Duke, their impact 4 guns blasting Slick into chunks.

Badly outnumbered and with enemy closing in from both sides, Horowitz lobbed a grenade around the corner to try and break up the column of 'bots and Zeig Troopers ready to walk around and overwhelm him. The resulting blast only knocked over the warbots, but stunned one of the Zeig.

Now fully aware of the grenade rules (Which I really like BTW) Jones tossed one as well. It messily killed the stunned Zeig and his bunched up squad completely panicked (rolled boxcars) and lit out of there. Jones ran to support Duke, leaving Miller with Horowitz.

Back on the other flank. Enthused by the success of his squad, Duke lobbed a grenade into the midst of the oncoming warbots. knocking one over. His second attempt led to a fumbled grenade which unfortunately took Jones out of the fight, but left Duke merely dizzy but prone. 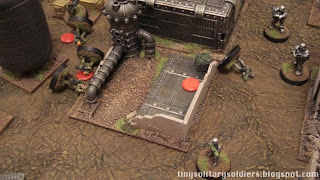 By now the Mercs had only 2 uninjured men left and were facing four times their number of heavily armed zealots ad robots. Dragging their bleeding buddies, they were able to make use of the refinery to make their way off the table edge.

Considering what they stumbled into, I think the Mercs got off pretty lucky in the end.

I had a much easier time figuring things out this time, and I'm pretty sure I got everything right. It was typical that I managed to run into the maximum possible enemy opposition as soon as possible.

Most of the casulties occurred at the "corner of death" as waves of enemy walked around into SAW fire and those that lingered were messed up by grenades. Duke's double 6 grenade fumble was the death knell for victory this game, but pretty funny.

The Warbots/Scourge were difficult opponents. Their predictability somewhat offset their toughness though, which seemed "right" for merciless robots.

I forgot to do the armor rules, but figured that since the non-robot forces had approximately equal armor on and the robots had the "Brick House" rule it was no big deal.

I'm now convinced that the THW rules are a great fit for my solo games. If I keep making card decks for things (an events deck for use when rolling doubles on activation will be first) and organize my various rules sheets it's a very quick game with plenty of surprises.
Labels: Battle Reports, GZG, The Scene