I just remembered this incredibly silly movie  and found a reason to buy Khurasan's Karkarines.. So I can pit them against 15mm.co.uk's Octopods!!!
The Octopods will have one of THESE... 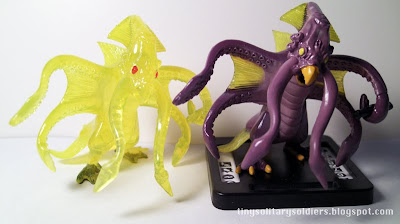 A while ago I bought a bunch of Monsterpocalypse models via eBay. The intention was to use them for Ganesha Games' upcoming ruleset. As that isn't published yet, I think I'll paint some of them as 15mm super-monsters (Tank proxies?).
The nice thing about MonPoc figures (if you don't want to use them for the actual game) is that when you buy them you get 1 Normal and one "Ultra" form in transparent plastic. Which translates as 2 for 1 to me, so I'll still have a spare for when the Ganesha Kaiju game is released. Excellent!
As a side note, the out -of-box paint jobs on these things are really good. They have made clever use of airbrushing and glazes to get some really respectable effects.

I don't know if there's a MonPoc Shark creature, if not then I'll have to do some converting...

Yes, there is a Shark monster. I bought it. Ebay, you bastard.
Labels: 15mm.co.uk, Monsterpocalypse