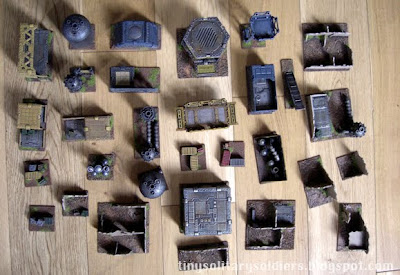 Here is a photo of the terrain I have built so far. It's a bird's eye view so you can see that I've based everything on squares measuring a multiple of 40mmx40mm. The smallest pieces are 40x40, the longer ones are 40x80 and the big ones are 80x80.

I had no exact reason for doing this initially, except that I could get the MDF already cut from Warbases.co.uk for peanuts and wouldn't have to cut anything myself.
However it's quite useful as a lot of the time you can eyeball the terrain for measuring. Also, if I make up a bunch of open-ground 80x80's, I could potentially build a whole board out of just terrain sections like a jigsaw. The clearest benefit to me is that it makes this lot very easy to store, as they pack into a box very neatly. Much of this was inspired by my happy times playing Necromunda, followed by my sad times struggling to store all the huge, oddly shaped terrain. This lot is more than a 2'x2' table requires and fits into a space a little larger than a shoebox. Did I already say I love 15mm? My old gaming group kind of shared terrain responsibilities, and was pretty lazy. We played on ugly tables as a result. I think that (like bases) good terrain compliments good miniatures while bad terrain detracts from them. Ordinary paint jobs with good basing and terrain will make a more attractive game than the reverse (IMO anyway). 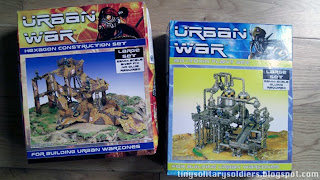 What you see here is a mix of stuff built from Urban War "Hexagon" and "Bio-Toxin plant" packs, some metal crates from GZG, and lots of scratch-built ruins I made myself.

The Urban War/Imex stuff is designed for 28mm models, but if you're careful it works very well for 15mm. It is also relatively inexpensive. I got mine from the Urban War website for £7 a box, but you can get it in various forms from many different vendors. 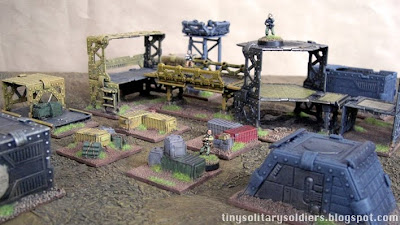 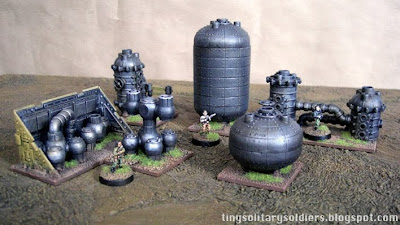 I chose these packs because I thought they would be useful to make scenery for a war-torn mining planet. What I really wanted was Stalingrad style ruins, but could find none I liked.
I brought home several big sheets of perspex I had left over from building a lightbox and thought I'd use it for making bases, as I'd run out of MDF ones and wanted more 80x80 ones for the larger structures.
As I began to cut and snap it into squares, I realized that it would probably be pretty easy to make some ruined corners with it using just plastic glue. It worked a treat. I used some sprue cutters to tear up each bit and then use the offcuts as rubble. It was surprisingly fun. 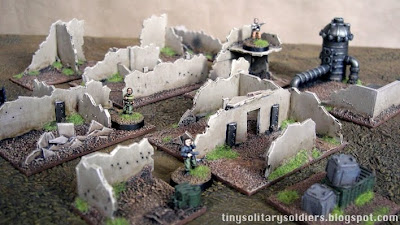 I used a tube of ready mixed poly-filler and PVA/sand on the bases, painted, washed and drybrushed the sections, then stuck on some of my static grass to help tie them into the infantry figures. I'm very happy with how it all hangs together. I think it's certainly worth doing a lot of terrain at once so it comes out consistent.
I'm looking forward to building some more, but I need some foliage pieces before I churn out any more hard cover.
Labels: GZG, Scratch build, Terrain