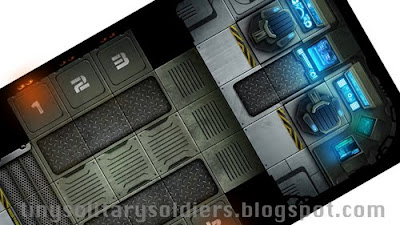 Today I tried making some modular deck plans for playing boarding actions with. This is a fairly big project, but still a lot easier than making 3d modular terrain.. Plus this will be something I can store in comfortably in a 20cmx20cm box. :)

This is the control room, which is 5x10 squares. All the other pieces are 5x5, inspired by the tiles on the Battlestations website, and the ideas Mel Ebbles came up with his for his long awaited Guncrawl 2.0.

If I make a deck of cards that match the rooms and corridors, I can do a WHQ/Guncrawl style games using CR which ought to be lots of fun.

For maximum scalability (and just as a fun challenge) I did my best to make every part of the image out of Vectors. The only parts that aren't vectors are the dirt layers, the checker-plate and the monitor details.

The dirt was painted onto a layer, and the screen images were game screenshots from google.
I did make the glowing control panels though.. Which were surprisingly easy. What this means is that the image can be scaled up (or down) with no loss of detail.

It was fairly time consuming, but because of the way I built the file, I will be able to make the rest of the ship pieces extremely quickly. I'm planning to mount the completed tiles on the back of self-adhesive Linoleum tiles. This will make them nice and weighty, non-slip, and mean I don't need to faff around with spray-glue. Well that's the plan anyway.

(If they come out nice enough I might try my hand at selling them as PDF's for people to print themselves. I will replace the monitor images with ones I make myself in this case.)
Labels: 15mm Spaceship Deck Plans