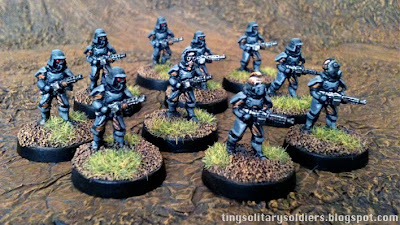 As I'd only ordered 7 zombies, I thought I'd wait until my next order from Khurasan to finish off enough to game with. So in the spirit of getting lots of "bad guys" done before starting off the heroic forces I got stuck into a batch of Rebel Minis Titan Marines.


Although they look extremely reminiscent of the Jin-Roh anime, they are enough like Helghast that I decided they would make fine space-fascists. This meant Hollywood grey uniforms.

Grey and black are tricky at 15mm. Not because they are hard to acheive, but because they look terrible at distance. To my mind this means you have to highlight the bejeezus out of them and make sure there are areas of another colour to break it up.

In this case I gave them high contrast brown fatigues under the armour plates, red eyes and metal guns.
Several heavy black washes took care of the shading and brought out the detail. The masks were done the same colour as the armour but I hit them with 2 extra layers of black wash to make them more visible.

Also of note with these figures are some head-swaps using the excellent sprues from GZG. I used a pair of nippers that very nicely took the heads off at the armour join. The scale is spot-on and it's particularly nice to have some extra variation in this group, as the models are quite similar in pose.
I still have a half bag of these left, and am thinking of swapping all the heads on them to make a different troop type.

These guys look great on the table and were a pleasure to paint. Because of the limited palette they were also very fast to complete.
Labels: Rebel Minis