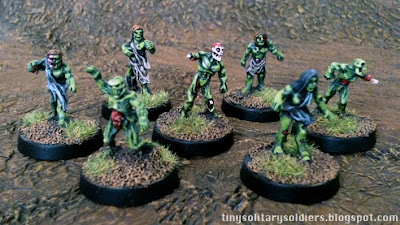 After my initial forays, I made some important decisions:

And so I began with the excellent khurasan miniatures zombies. These models are packed with detail and I liked the skull-faced nature of them. Lots of other zombie ranges could be painted as regular citizens and you wouldn't know they were the walking dead. Plus these ones have no obvious period clothing, so will work well in sci-fi and weird war 2 games.


The (New) Technique
(Everything after this post has been painted more or less in this manner, so I won't keep repeating it)

You will see there is nothing remotely clever here, it's all very bog standard "how to paint a miniature" stuff. The approach is the interesting part.

I think of these models as being "Big warmaster" rather than "Little 40k" pieces.  The extra time it takes to do the highlighting instead of solely relying on the wash is actually not very much, and the result is far superior on the table. I was greatly inspired by the basing and paintwork on 15mm.co.uk

Interestingly, the "old" technique looks pretty good in photos and the "new" one looks less sophisticated.. But maybe that's exactly the point. This "harsher" way of painting them (and also using unrealistically bright colours) makes them look much, much better on the tabletop. Painted like this, I can see the nice detail at distance rather than a brown blob.

Now happy with the workflow, and it's still many times faster than painting "big" models. I can comfortably paint a unit of 8-10 models to this standard in less than 2 hours (!)
Labels: Khurasan, Painting guide