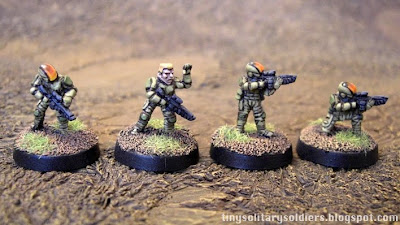 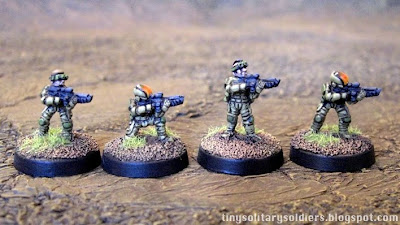 My most recent batch of models were the "Player Forces" I'd been saving until I had enough painted "bad guys". This was deliberate, and to make sure I didn't cave in and use unpainted metal as opponents. I hate unpainted metal.
These figures literally have it all. Great posing and lots of variation, plenty of detail that takes paint well, great looking weapons, not too big, not too small.

The UNSC Light Infantry are one of GZG's newer ranges and are absolutely spectacular. I actually painted some of these back when I did the NI troops as an Elite force. I did them light grey with dark grey detail, and bright yellow visors. I was inspired by the cover of the sadly mediocre PS3 game, "Haze". It looked terrible. The "old method" greys looked completely indistinct, and the weapons were plain and hard to see. So I stripped them in acetone nail polish remover (Boots, 99p) and tried again.
Pulling them off the old MDF bases and stripping them was in fact, extremely fiddly and difficult. I don't think I'll bother with it in future.

I have more to do, so rather than explain the painting process here, I will make a tutorial and explain as I go in another post. I did spend a little longer on these than earlier figures, but they were still not especially difficult.

I am very pleased with how the paintwork came out. The excellent detail all shone through and the oldest trick in the book, painting the visors like "Jewels" looks great at 15mm.
The head-swaps worked a charm as well.  The sprues (also from GZG) are much closer in scale to these figures than some others so they don't look too big.

Interestingly, when buying online I've often been worried or put off by big heads on 15mm models, but they usually look much better IRL than in a close-up. At gaming distance, they look perfect.. I guess it's one of those scale illusion things.
Labels: GZG, UNSC