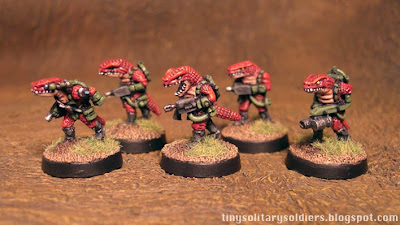 These guys from Khurasan were what tipped me over the edge and into 15mm. These are easily the coolest alien troops on the market as far as I'm concerned :)

The Garn are big, mean models. They have separate weapons on little sprues, which will come in handy when I start converting the 2nd squad I bought. I'd love an expansion to the range, hint hint. 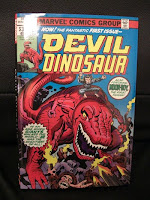 I was torn between using the brown tones of the example figures on the website, or coming up with something else. Green was right out.. I already have way too many green figures. Then I realized it was a no-brainer.

Devil Dinosaur is my favorite Jack Kirby comic. It is incredibly stupid and sometimes makes almost so sense.. But it's awesome. Every story is about "moon boy" getting into a scrape and Devil stomping everything into dust. Sometimes it's cave men, sometimes it's aliens, and in one case it's actually Godzilla. Not joking. An example of how ludicrous it gets is the reason Devil is red.. He went near a volcano. That's it. Seriously.


But I digress. This Garn unit will make excellent mercenaries. With my others, I want to split them between adventurer crew ("I'll see your wookie and raise you a freakin' T-rex, fool.") and maybe mixed in with a squad made of CMG aliens. Like an Alien.. Legion.
Marvel-ous.
Labels: Khurasan