The first models I picked up were a bunch of Ground Zero Games NI infantry and some of the "Crusties" aliens.

I decided to do the WW2 U.S colours so I could use them for retro-sci-fi forces against future space-facists. The Crusties would be done something like the D9 Prawns.

At this stage, I wanted to finish them very quickly and was intrigued by using "Magic Dip" technique.. Which for some reason seemed ideal for 15mm to me. This was based on an attempt to paint a NI infantry model traditionally as I would have done a 28mm, and finding it fiddly and too time consuming for the final result.

Technique:
Trim and glue to base
Add sand and PVA.
No undercoat (Seemed pointless)
Flat base colours on everything. (Buff suits, green helmets and gear, grey guns, gold visors, brown base)
1 coat of Devlan Mud Wash with a little bit of Future Wax over entire model and base.
Allow to dry, then slop a little bit more wash into recesses where it looked too light.
Allow to dry.
Drybrush base, paint edge black, glue on static grass. Varnish with Dullcote.
Done. 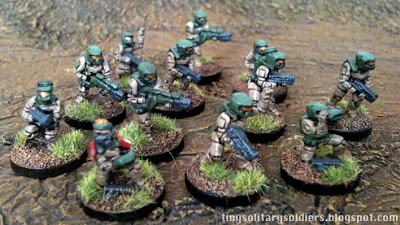 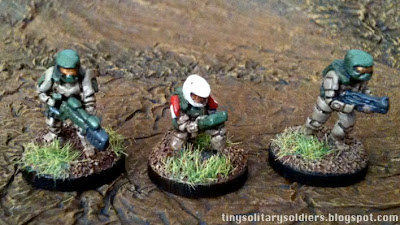 Result? Not happy.
They looked nice when painting them right up next to my face, and the dip/wash did a great job of bringing out all the nice details...
The next day though, when put on the table they looked like little dark brown blobs. I had forgotten a lot of what I learned painting Epic models a couple of decades ago.. Tiny figures need much stronger highlights at distances of more than about a foot away, or you just can't see the difference. The figures looked OK, but were difficult to tell apart on the gaming table and blended into the background to much. (Not helped by my  Zuzzy mat being painted brown I guess.)
Also, I had wanted them to look like little 28mm figures so based them on 18mm MDF discs from Warbases.com. They looked nice, but were a bit fiddly.

(Strangely, they look better in the photos than IRL... I think this technique would be great for very quickly mass-painting a 28mm army.)
Labels: GZG