I'm almost ready for a game of Frostgrave now that I have 2 warbands painted! One is made up of Copplestone castings Barbarians and Nothmen, the other is Orcs and goblins from the Blood Dawn range. All figures pictured were based and undercoated in one session, then completed over a long afternoon/evening (half of the barbarians were already painted and only required base decoration and some touch-ups).

Practice with the Reeves coarse acrylic medium used as snow effect has yeilded improved results. Sometimes applying a little more once the first go has dried is a safe way to thicken up the snow without getting it all blobby.


The Orc Wizard still needs some facepaint and maybe some decorative detail on his clothes. I'm working on some skeletons (Blood Dawn) which are a lot of fun to paint... I think I'll order some of the Blighthaven ones to supplement them.

It's interesting to note that I always get on with a project much faster if it has a theme, rather then the more common "I could use this for a number of things" plan.
Additionally, figures and terrain built for a specific theme tend to look significantly better than ones that could be used for a variety of themes. When you aim for "generic, you rarely get exciting results. 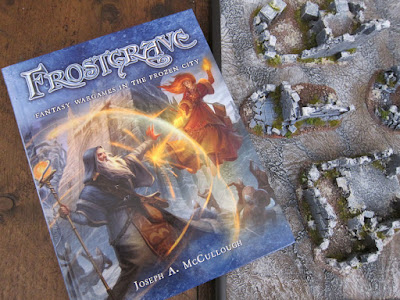 I’m back again with a little post about a frugal gaming project that got me painting again. Frostgrave is a little game published by Osprey that has crept onto my radar largely due to Instagram. When I saw the hardcover rules on Amazon UK for £10, I snapped them up. The title is a little deceptive, as I only spent this £10 for the rules, already owning everything else I have used… Although I did pay for the supplies and figures long ago.

At first I thought I could use my (never opened) Reaper Bones Kickstarter package for miniatures, as it is a small skirmish game that only requires 6-10 figures for a starting faction. The requirements are basic fantasy so will work with just about any figure range. “Hey, use figures I already own, that’s cheap!” I thought. Then I started thinking about terrain. The Bolt action plastic hamlet looked perfect.

But after much planning and deliberation, I realised that getting into 28mm was just going to be expensive and a storage hassle… Not exactly news, but I resolved to stick to my 15mm guns instead. The Bones went onto eBay and I dug through my unpainted figure supply. Copplestone castings 15mm range still outshines all others in my mind, so I immediately tested an idea for snow basing on the ones I already had painted. The method is incredibly simple, it’s just the same texturing paste (acrylic artist medium) I use for basing, only unpainted. 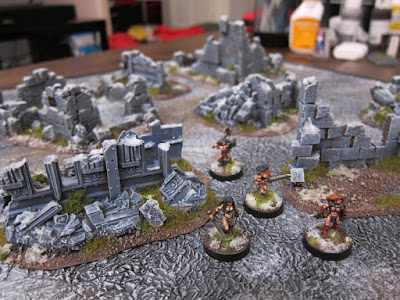 All these terrain pieces were made out of cork tile scrap cut into bricks and superglued together. I also used a couple of old 28mm 40k resin ruined walls I had lying around. Coffee grounds were glued to the MDF bases as ground texture. Once painted, a little winter static grass and clump foliage was applied to add interest, then the acrylic medium was applied with an old brush to create the snow effect. Crucially, I didn’t have to buy anything to make this stuff, as I already had all of it on hand. 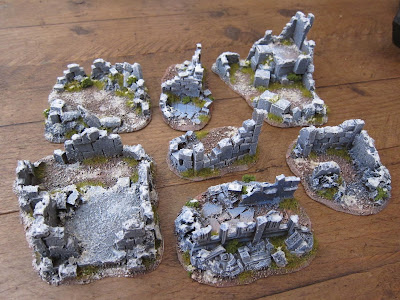 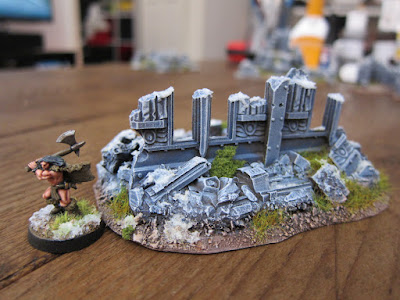 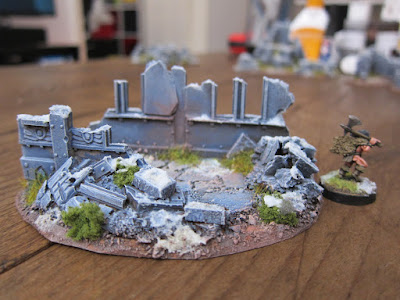 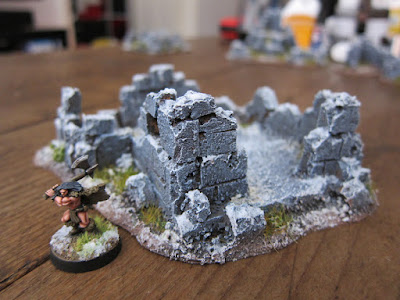 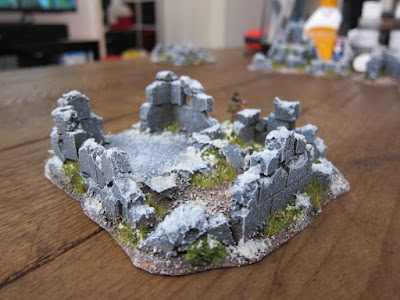 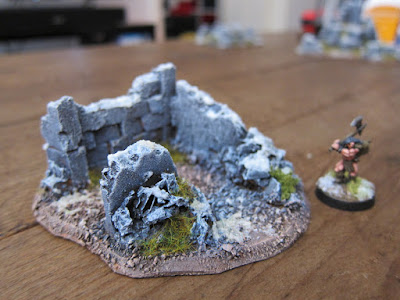 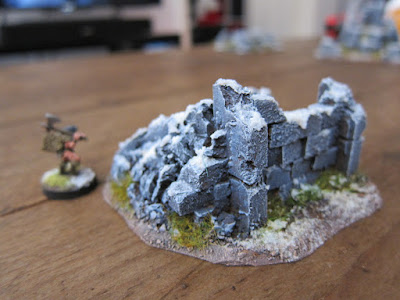 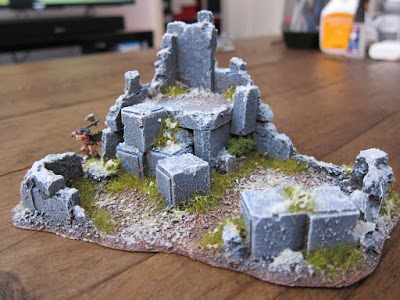 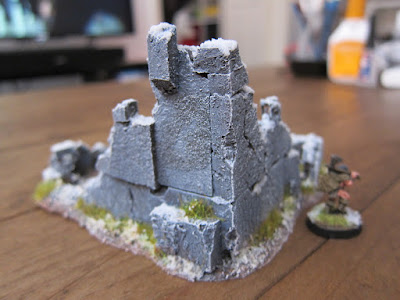 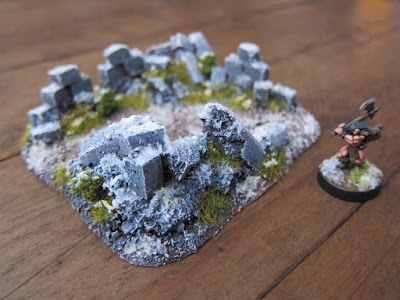 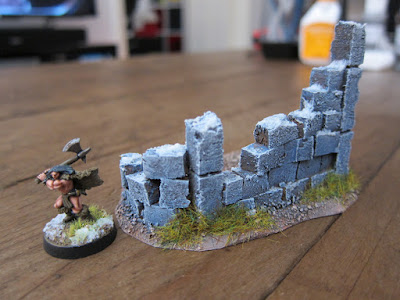 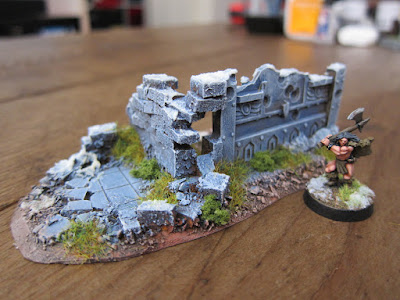 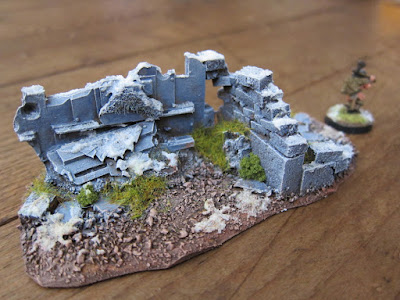 Of interest is the fast painting method I used. Each piece was base-coated in burnt-umber craft paint. Then the stone areas were roughly drybrushed with space wolf grey. A light drybrushing of pale grey, then a little white finished the job.
The brown base coat really adds a natural feel, plus has the added bonus of making the ground easy to paint with just a light drybrushing of mid brown. I found it really interesting that departing from accepted wisdom (which would have been a black, dark grey, light grey progression) not only got me there faster, but had a better outcome.

The base board is my old 16” framed square with a Zuzzy mat in it. I dry brushed a bunch of light grey and white all over it to look snowy. It is quite possible this will be too small, but hey, I already had it so it was free. It's perfect for Open Combat (another yet-untried set of rules I have in PDF form) so won't be a total waste if it doesn't work out for Frostgrave.

I’ll possibly order some barbarian archers at some stage, as I do lack ranged troops. Nevertheless, my collection has plenty of other figures to paint up in the meantime, certainly enough to test the game and see if it’s worth continuing with. If not, no biggie… It was only a tenner after all! I'd promise to come back with a play-test, but honestly I don't know when that will occur. Maybe soon, maybe not :)

The rules are interesting. While the theme of the game is loosely like Mordheim, it is mechanically very different in just about all areas. The meat of the game is actually spell interaction as far as I can tell, and it has a much more modern feel with it's activation sequence and opposed d20 roll system. I should add that while I was a huge Necromunda fan, I never enjoyed Mordheim at all, which is further testament to my interest in Frostgrave.