Last night I played through a few games of Throwdown using the new scenario system I've been working on. Here are some photos of the setup: 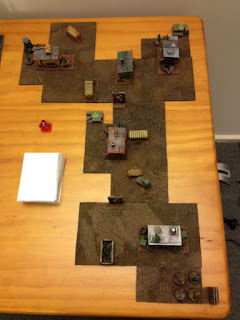 Here you can see how the layout is made up of large and small tiles. The small tiles include a point which may be the deployment zone, the objective zone, or sub objective zones. When you arrange the scenery you don't know what each one will be to ensure fairness.

The idea is that the areas outside the board are some kind of impassable terrain... Blocked off streets or canyon walls etc. This style of layout is inspired by video games and the frequent posts about how the Mass Effect game on Dropship Horizon.

There are a few problems that became apparent on my test runs though. The first is bottlenecks... I think the game worked much much better when played on a 16" square with dense terrain. This is because of the multiple pathways. The bottlenecks created by this sort of layout are probably quite realistic, but they are kind of boring to play with the rules I have written so far. To go back to the video game analogy, I had built a *single player* level, as opposed to a well designed multi-player level, which allows more freedom of route. Single player levels in video games are reliant on scripted events to keep them interesting, and this is complex to simulate in a game like this which is intended for fast solo play.


The more I ran the game through different scenarios, the more I began to get the sneaking suspicion that I'd designed something that was very "clever" but wasn't enough "fun".
The mechanics are pretty slick IMO, but I had a better time playing TRWNN, which is simultaneously simple and messy. 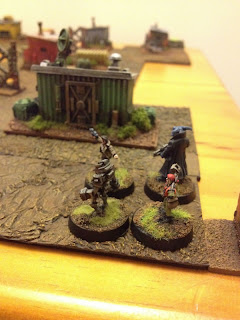 I'm now in the difficult position of realising that the rules I have taken this far have succeeded in most of the goals I set out to achieve, but at the expense of enjoyment. That elusive fun spark that are even more important to a solo player, as the camaraderie and competition of a live opponent are absent.

I think that combing player and enemy actions into a single deck of cards works fine for head to head play, but in a solo situation a better solution would be to have dice based mechanics, the player controls his models as he wishes, and the game engine determines the enemy actions.

This could be done with cards in several novel ways, but in the end, dice and charts are probably best. The Department rules look like they have done an admirable job with this concept, and on paper at least I like the look of them better than THW systems.

So it's not looking good for Throwdown as it currently exists. On the bright side, there are plenty of terrific rules systems out there for everyone to enjoy while I have yet another hack at this beast.

Check this out too.. I bought a Laser Fuchs linear beam laser for checking LOS... I find it to be well worth the money spent. It's awesome!

Well, tonight, I'm going to try out the Department. I need to think about something else! Hopefully a report will follow.

Some terrain and a couple of GW Rippers I painted shortly before I left. I've got them set up here for a test  game of Throwdown. You will notice that I have sliced up my Zuzzy mat and mounted it onto 2mm MDF board sections (Custom made for me by the excellent warbases.co.uk) ...  This is Throwdown's Close Quarters Battle map system, where you "carve out" playable area with tiles and add terrain. It is excellent for representing interiors or just choked streets, canyons or thick jungle. It packs up real small too. :)

Today I managed to take a trip into the city to shop for supplies (and a mother's day gift as a sub objective). I was a bit taken aback by the prices of everything at Hobbyco, and ended up at the Sydney GW store.
The Staff were very friendly and not at all aggressive when I told them I was painting 15mm. The store manager took a lot of time to help me with the new fangled paint system. Hilariously it has a 3 shade arrangement that is designated by game-fluff words, so is totally unintelligible to me.

I'm looking forward to trying some of the new types of paint, but I only bought the exact colors I would need for my next non-Khurasan batch of figures. Can you guess what they are based on the colours shown? Oh and I forget to get yellow, dammit.

I have to ride to my sister's place for mother's day tomorrow, and I'm still waiting for brushes and bases from em-4 before I can start painting. And I just remembered that I don't have any basing materials, knife or files. I miss my kit!
25 comments:
Labels: Hobby 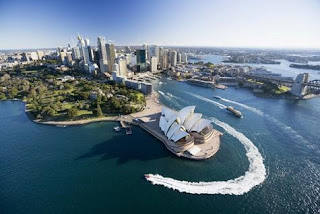 I have now been back in my home town of Sydney for one week. I'm only just fighting off the last of the jet-lag (9 hour time difference to the UK) although I'm still waking up at 5-6am. This is probably the worst jet-lag I've experienced in my various travels, but then again maybe I'm just getting old.

The flight over was OK as 27 hour economy flights go... However I didn't get a chance to do any of the things I thought I would. Meal trolley interruptions and falling asleep put the kibosh on most of my plans.

I did manage to read a pdf copy of "The Department" on my iPad though, and I must say I'm extremely impressed. The rules are very clean and the campaign system is excellent. On top of that it's heavily geared toward solo/co-op play in a way that other Goalsystem games are not. I was going to write a glowing review of the book, but I think I should play a game or two first before I do that.

Arriving here after a 7 year absence is a very strange experience. I feel like I'm in a time travel movie where life has leapt forward 7 years but I haven't. Besides that it's been great catching up with family and a few friends between sorting out bank account, driver's license, sorting internet in the new office, trying to stay awake etc. 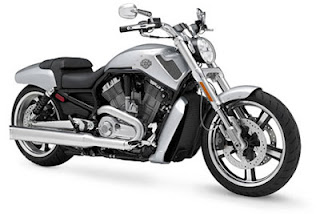 I bought my best friend's bike to replace my Night Rod, which was hard to say goodbye to. The new beast has made Sydney flat-hunting almost bearable... It's an awesome machine and has gone a long way to stopping me feeling like a stranded tourist in a parallel dimension.

I'm going to my parent's place for  a family lunch today, but am considering shooting into the city after that to visit Hobbyco (ah, memories!) and GW to grab an emergency painting kit...
Theres a postpack of GZG goodness that made it into my luggage taunting me, and I have some unfinished Khurasan business on it's way that will probably arrive before my belongings do. I don't have any bases, but EM-4 is mailing me a pack now from the UK. I think the postage cost almost as much as the order.. But hey, they got me hooked on 20mm slotta bases and now I'm locked in!

My next few weeks of posting will probably be very game-report heavy now that I'm awake enough to get some played. As I don't have a TV or consoles to distract me for the next month, I will be mostly:

-Playing Throwdown (writing up missions and trying to finalize the rulebook text)
-Playing the Department
-Trying Red Sand, Black Moon, which I just downloaded. I think I'll pick up some lego minifigs for this.

Sorry about the lack of miniatures content in this post, thanks for bearing with TSS in this transition period!
35 comments:
Newer Posts Older Posts Home
Subscribe to: Posts (Atom)