I grew up on the Battletech with all the robots stolen from Macross and Dougram Anime, hated the clans, hated the preponderance of the chicken-walker mecha school. I like my robot suits to be classically robot-like. I love early Gundam too, especially the 079 era, and the 8th MS team series. So for my Star Army armor (I don't have room for tank battles) I'm using walkers.

This model is an AT-43 figure that has a bit of a MAK vibe that I like.

Before I painted it though, something had to be done about the guns. I wanted the beam weapon to be more of a gun and less of an underslung bazooka style weapon, so some chopping was in order.


Once converted, I had to paint it. This was basically painting a 28mm figure, trying to make it look like an AFV. I think it came out good enough. I tried doing some metal -chipped battle damage, but I dont think I'm good enough at it at this scale. Still, he looks great with my GZG UNSC figures so I'm happy with the end result. 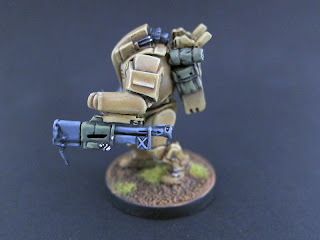 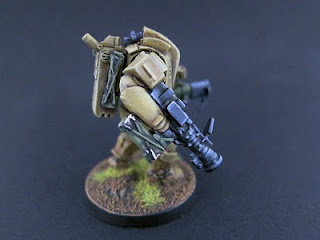 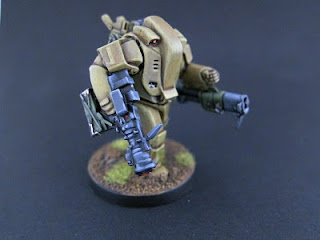 For my next conversion, I'll be trying to make a Red Blok Kolossus look like a Cult of Andromeda or Lhurrg mecha!