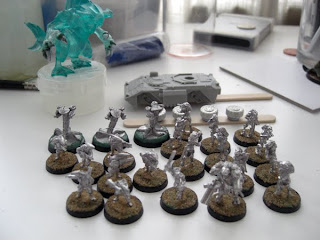 I've been too busy with a new job and partying to get near my miniatures in the last week, but I did a little prep work and got some things ready for paint.. Here is a photo of all the goodies waiting to start.
Karks, Lhurrg, a gun-carriage and some overlords.. Not to mention my Mega Shark, who is all ready for undercoating.
Also in the mail this week: My dice for Ambush Alley, and an infuriating post notification that my AE Bounty rules are here, but at the local depot.. Which shuts at 1:30pm.

Good times ahead if I get a moment to myself anytime soon!
6 comments: 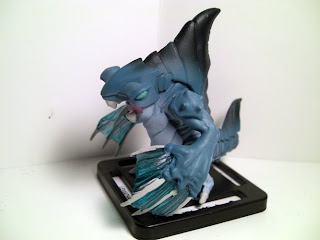 I got myself a shark monster from Ebay to go with my (still in transit) Karks. The firest thing I noticed was that the newer Monpoc figures are painted a lot worse than the earlier ones I bought.
The more I looked at the hands on this guy though, the less I liked them.
I decided to try sculpting my own claws to replace the ones on the model. The paint was so thick I decided not to try over-painting or stripping the model and just went straight to the "Ultra" form that it comes with.. Which is the same model without the paint. 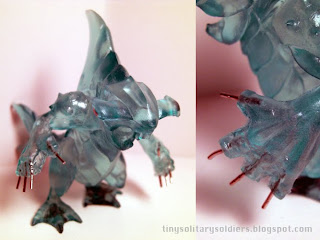 The first thing I did was cut off the offending long claws and webbing. After a bit of carving the plastic, I drilled and inserted pins into the stumps to give the greenstuff something to hold onto. I got a pin-vise from the local hardware store for about £3 (a reminder of how crazily overpriced GW tools are) and used paperclip for the pins. 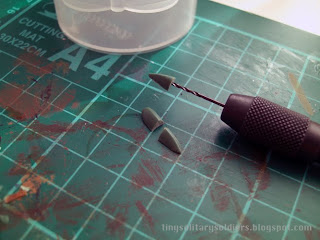 At first I tried pushing a blob of putty onto the wire then shaping it into a claw.
This was very difficult to do because of the elastic nature of the putty. when I'd done 4 claws I suddenly realized that it would be easier to shape the claws independently, and then cut off the excess before drilling and pinning. 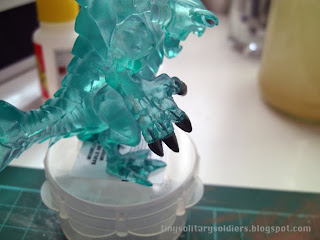 The "middle finger" claw is the one I made as decribed above.
In the light of day, I think my mistake was trying to sculpt the claws in one hit. I could have got a better result by roughly sculpting "cores" to each claw, then when it had hardened adding more putty for the final shape. 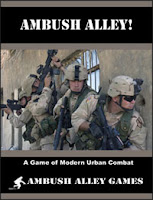 The Ambush Alley rules were suggested to me by the TMP crowd, more specifically "Tomorrow's War" which is their ruleset adapted to Sci-fi. Sadly, these rules are not yet available.. Which makes it hard for me to buy them.

So I went and downloaded the quickstart version of Ambush Alley to see what the mechanics were like. The game is designed for small numbers of figures on a small table and has really nice and quite simple mechanics. It is clearly written and easy to grasp.. In fact I think it's one of the least confusing rule books I have ever read. In short, they seem to be great!
They seem so great that I was tempted to just get Force on Force (Their more recent set) and mod it to my own liking. I'm holding off and hoping TW just doesn't take too long.. If TW was available to buy today, I'd buy it without hesitation.

I will try to play the introductory AA scenario one night this week with my sci-fi figures and see how it goes.
6 comments:
Labels: Solo Gaming 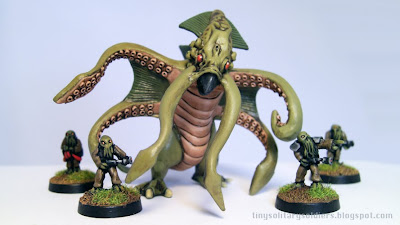 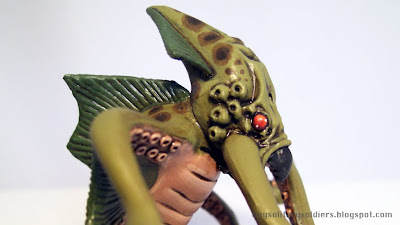 Behold the Megapod! Giant war-beast from the Monsterpocalypse game, repainted for my octopod forces from 15mm.co.uk.
Before painting the transparent yellow plastic model, I carved out the submarine in his tentacle then undercoated with Army Painter spray.  I painted this model more like a traditional miniature so was an interesting break from 15mm.. I started getting quite obsessive about refining wet-blending on all the large smooth surfaces. But in the end it was just taking too long so I stopped it here as I wasn't really enjoying it. I didn't have a base big enough for this guy, but have ordered some 50mm round ones to do the job. When based he will look even bigger.
I think the quality level is ok for the moment.. Maybe when I do the base I'll throw on a couple more highlights.
6 comments:
Labels: Monsterpocalypse 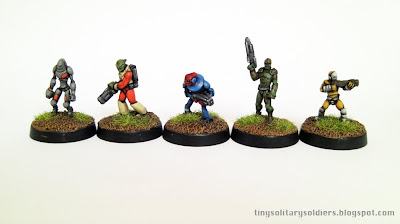 I bought these quite a while back from Critical Mass Games but had neglected to paint them. They are brilliant figures, but seem quite small and thin compared to the rest of my collection.
AE Bounty being released got me thinking about these guys again, so I painted them as a break from doing hordes of drab Octopods.

It was fun doing 5 completely different colour schemes instead of uniforms, and I tried to make them very bright so as to stand out from the more military models I have. The colours on the guy second on the left was inspired by Bossk the Trandoshan bounty hunter from The Empire Strikes Back, then I just tried to make the others different to him.

While on the small side, the detail on these figures is amazing. I almost lost my mind trying to paint the eyeballs on the blue guy.. I have no idea how somebody sculpted them. My personal preference is for much more exaggerated chunky detail on figures this small, as I feel like tiny detail is lost. Also it's a bastard to paint. 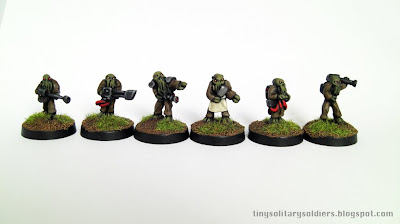 Also finished (But not all pictured here, as I skipped the duplicates) are my Octopod Heavy weapons and command models. I have ended up with a lot of affection for these troops. They are simultaneously Totally Evil/Goofy as Hell.

I think tonight I will begin the Giant Octopus support beast.. And further negelect the Spaceship Deck Plans. They are very close to being finished (95% I rekon), but are are quite stressful to do after a day  working in front of the computer. Maybe tomorrow.
7 comments:
Labels: 15mm.co.uk, Critical Mass Games
Newer Posts Older Posts Home
Subscribe to: Posts (Atom)